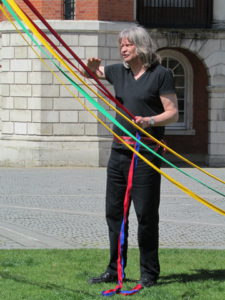 Mike Ruff gave up any attempt at a day job more than 30 years ago to concentrate on being a musician. Working in schools came a few years later and the purchase of a Maypole meant “have Maypole will travel” became a major part of Mike’s work. He has taught dancers of all ages and abilities, creating shows and teaching teachers. In 2012, he worked with the English National Ballet to provide Maypole dancing and music for morris dancing for their Big Dance event.
Two creative partnership projects in Slough in 2002 resulted in Mike forming Tradamis which is now a charity, with Mike as Director and one of the Trustees. Through a nationwide network of practitioners, Tradamis offers a wide range of teaching modules, training, mentoring, and resources on traditional and historical dance and music aimed at increasing appreciation of our cultural heritage as widely as possible.
Much of Mike’s work had to stop during the Covid 19 pandemic and at the time of writing it is not clear how much will get going again and how much will change; certainly, some of his bands are unlikely to work regularly any more but that could change again in the next year. He is still doing barn dances and teaching country dancing [for the English Folk Dance and Song Society at their Thursday classes]. There are also regular solo gigs, anything from Old Time Music Hall to French Café. A more recent project has been the creation of the mAy team to offer Maypole performances at major events and Maypole teaching at more informal events. They appeared regularly at Countryfile Live at Blenheim and Castle Howard as well as The Swiss Garden, Spring Live and many other events. 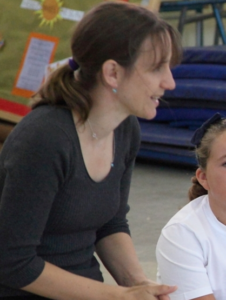 Jenny Read lives in Devon where she enjoys sharing her love of music and dance with people of all ages. Having gained her BA Hons in Music from the University of Exeter, she went on to study at the Trinity Laban Conservatoire of Music and Dance, becoming the first folk dance artist to gain the Diploma in Dance Teaching and Learning for Children and Young People (DDTAL) from Trinity College London. She now works as a community musician with Wren Music as well as continuing her own freelance practice. She is currently pursuing her ongoing interest in the therapeutic value of music, by studying for a masters degree in Music Therapy.
As a performer, Jenny dances and sings with the UK’s old-time American string band, The Buffalo Gals, and has played and called for a good number of ceilidhs over the years! She is also five times winner of the Dartmoor Step Dance Competition and has introduced many hundreds of people to the joys of dancing on a tiny step board!